Switch on your TV and turn to the news channel, any global news channel and if there is a war ravaged town in the Middle East, an earthquake in Indonesia, a village bombing in Sudan or even a military coup in Africa, there is a very good chance that somewhere in the chaos there is a Toyota Hilux or Toyota Hiace being used to help civilians, or running in the background ferrying aid workers or it is the sole vehicle taking on the harsh terrain with no issue.

This is the legendary capabilities of the Toyota Hilux (over the ages) in all its splendor.

Recently there were 2 Toyota Hilux pick-ups that were tasked to reach the northernmost human settlement in Eurasia and they managed it making sure a Guinness record had been established. Deep snow can be an issue but not a total obstacle The expedition began on January 13, 2018, in the Russian town of Norilsk, and ended in Dikson in ten days. Up to the destination they had more inconveniences, including ice-cut tires!

The most complicated part of the route was through the Arctic part of Russia and through the Kara Sea glaciers. In the context, the last 30 kilometers were traveled one day! The air temperature reached -57 ° C, but with a wind of 17 m / s it felt like -70 ° C.

Standard pick-ups with 2.4 and 2.8-liter turbo diesel engines were used for the expedition. The differences were limited to the installation of MAXXIS NS5 PREMITRA ICE NORD tires, additional headlights, a small bullbar for radiator protection and some “bonnets” under the engine hood. A little help was needed 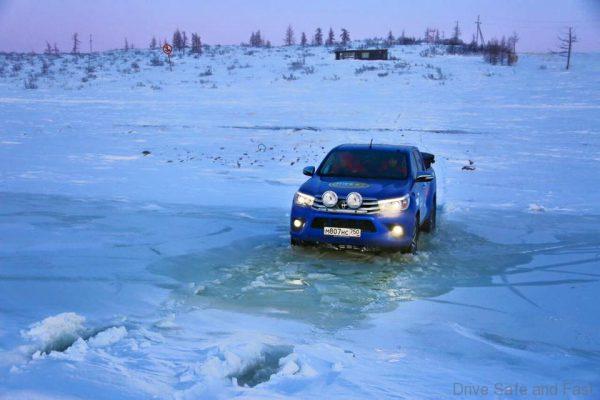 In accordance with Guinness Guinness Book requirements, field machines could not be fitted with double glazing or additional differentials.

We remind you that Dikson was founded on 7 September 1915 on an island of the same name, later being built a continental part. The name was given to the merchant and Swedish traveler Oscar Dikson (1823-1897). There is an airport with a concrete track, but also the northernmost seaport in the Russian Federation.