Did you know that Mazda has moved into hybrid systems? With their ground breaking Skyactiv engines already saving fuel and offering smooth driving performance, Mazda engineers have worked on delivering even better fuel economy with their new range of vehicles starting with this all new Mazda3 range. A belt-driven integrated starter generator (ISG) converts the kinetic energy recovered during deceleration into electric power and stores it in a lithium-ion battery with a capacity of 600kJ. The system then uses a DC-DC converter to convert the power to the appropriate voltage and supplies it to the car’s electrical equipment. The lithium-ion battery is mounted between the wheels to minimise any effect on interior space while helping to optimise weight distribution and contributing to collision safety. In addition, Mazda’s M Hybrid system supports extended engine off for increased fuel economy. The M Hybrid system not only enhances the car’s environmental performance but also ensures better drivability. When the car is starting, accelerating or coming to a stop, transitions feel smooth and natural. By substituting engine torque for motor torque, the hybrid system can reach the same acceleration as petrol engines while using less fuel. 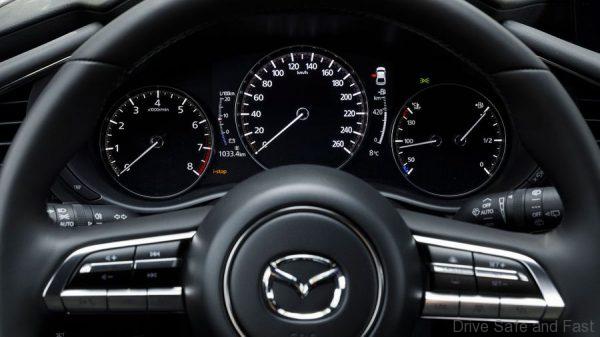 Furthermore, engine speed is promptly adjusted during up shifts in order to enhance the driver’s subconscious clutch operation. Thus, the driver enjoys all the benefits of a mild hybrid without any sacrifices in terms of driving pleasure.