Last week, Proton took us on a drive to Ipoh with their recently facelifted Saga. We were part of a small convoy consisting of 1.3 Premium variant Sagas, all with the new 4-speed conventional automatic.

We got to experience mostly in-city and highway driving, but we spent enough time with the engineering team behind the car to ask all the questions we needed. Here are our first impressions. 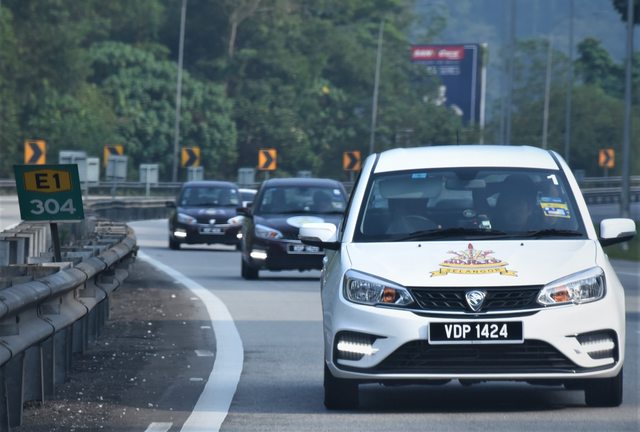 But first, some context

As with any topic, a bit of context can help make things clearer. This new Saga is a mid-life update of the 2016 Saga. The engineering team had something like 15 months to complete this project. Broadly speaking it brings in the following changes:

So while it is just a facelift model, it’s clear this update was rather major. the most affordable new sedan with ESC

Let’s start with the mechanical changes.

The same 1.3-litre VVT engine is found here and it still produces 94hp and 120Nm of torque. The 4-speed conventional automatic in here , however, is new for the Saga. It’s sourced from Hyundai, but all the programming and testing has been done by Proton’s engineering team. It’s actually quite well-tuned and responsive, managing to disappear into the driving experience in city driving. On the highway, it knows to shift down into 3rd gear when the accelerator pedal is sufficiently depressed.

Proton’s engineers explained that the gearbox has three maps, or programmes that govern its behaviour. In Drive mode, it the gearbox is mapped for maximum efficiency, shifting up as soon as conditions allow. In Sport mode (which is marked by an “S” on the shifter column), the gearbox no longer enters 4th gear. Not being able to access Overdrive does significantly impact fuel efficiency, but apparently does not lower its top speed. Again, this is based on what the engineers told us, but we didn’t see the need to find out its top speed for ourselves on public roads. The third setting kicks in when the car detects it’s above a certain elevation. This map kicks in automatically while in ‘D’ and shifts to a lower ratio when climbing and descending. We have yet to test this, though and no concrete figures were given.

Overall, the gearbox and engine are mated together professionally, and while nothing outstanding, it’s done extremely well and makes the previous CVT look clumsy and obnoxious in comparison.

Another important addition under the hood is Electronic Stability Control (ESC). It’s important here because the Saga is now the most affordable car to feature this safety feature and in fact, the only car under RM40,000 with it.

The new car also comes with front brake discs from the updated Iriz/Persona. These are an inch larger than they were before. The rear drum brakes are still present. Overall, all the little changes add up to a huge difference in the way the Saga drives. It’s measurably quieter and more responsive.

It has always handled rather well, but its weak bargain basement tyres, suboptimal driver ergonomics, hard plastic steering wheel and elbow touchpoints still hold the Saga back from its full potential.

Still, we’re talking about a car that costs less than RM40,000 here. And with that in mind, it’s the best driver in its class and price bracket.

To me, the most glaring thing about the exterior was the Mercedes-Benz inspired styling.

From the rear bumper with its fake vents to the rims with its 5 twin-spoke alloys, it feels like nothing new was attempted here. There’s homage (MX-5 to older British roadsters), there’s taking inspiration (Kia Sportage to Porsche Macan), there’s parody (Tata Nano to an actual car) and then there’s outright copying. The Saga falls close to the inspiration category, but threads dangerously close to being an outright imitation.

So yes, the Saga is really handsome and proportional, but this bag of tricks has a three-pointed star on it. Not what one would expect from a brand looking to re-establish a family look on the world stage. Again, RM40,000… So this is a complaint that ultimately does not matter to potential owners. one of the best proportions on an A-segment sedan

What might matter is the spacing of the lug nuts. The pre-facelift Saga featured PCD100 rims. This has PCD114 rims. This does not affect tyre size or prices, but if you’re someone who wants to soup up the car with new wheels, you’ll need to keep this in mind.

The front grille now features the Infinite Weave and Ethereal Bow pattern. Good to see they’ve adapted these motifs to suit the Saga’s look and size.

Step inside and you’ll see where the work was really done. There are so many changes here, so we’ll just list them out with short comments on each.

We’re sure there are some things missing, but that’s the meat of it. As mentioned, this is more than a facelift, it’s a refocused and refined product. And yet, with all the value-added and professional work done, they’ve managed to bring the price down.

The Saga has officially gone from being an option to consider for budget buyers and Grab drivers to the value-for-money car to beat. Again, you’ll need to readjust your perspective and remember that this is an A-segment car below RM40K when you get inside it, but that just goes to show just how well done it is.

You can watch our short First Impressions video below if you prefer. We cover most of the points above in more detail.

Goodyear Unveiled a Sneak Peak of What to Come at 2018...

Ford announces ‘Seize the Deal’ campaign offering rebates up to 17%

Honda Accord 2.4 VTI-L Advance Review: High-Tech Where it Matters